I’ve spent a lot of time recently working on a lab install of Site Recovery Manager and vSphere Replication. As well as the installation and configuration of SRM and vSphere Replication I wanted to be able to replicate, protect and recover VMs. In my homelab I have a two site setup running nested ESXi on a single physical ESXi host.

Having a lightweight OS to run on the nested ESXi helps save the limited physical resources. There are quite a few options for lightweight VMs and I’ve used some of these in the past. This time I wanted something that I knew was up to date, had VMTools and I could use to install other software and tools. One good candidate is Ubuntu. Canonical provides an OVA from https://cloud-images.ubuntu.com/ which makes it very easy to deploy. Luc Dekens has a great guide on using cloud-init to deploy the Ubuntu OVA. Luc also has a good guide to deploying Photon. Since it can be installed with a smaller footprint I went with VMware Photon.

I don’t want to spend a lot of time configuring the OS instances and wanted a one shot deploy from OVA. It’s just neater than creating a VM Template and deploying from it. Deploying an OVA and configuring IP addresses, root passwords etc all at the same time was a key feature I wanted. Unfortunately the official Photon OVA doesn’t let you do this.

I used William Lam’s reference packer build for PhotonOS as a starting point for customisation. I’ll explain the changes I made with the diffs as generated from my fork on GitHub.

I made a change to use the most recent Photon 3.0 Rev 2 Update 1 ISO. From the download page the only checksums available are sha1 and md5 so I change the iso_checksum_type to use sha1

One of the main requirements was for SRM to be able to apply IP customiztion. Leaving the guest_os_type as Other confuses SRM and the IP customization is skipped. Although Photon OS doesn’t appear on the Guest OS Customization Support Matrix, changing the guest_os_type to vmware-photon-64 does work. Another requirement was minimal use of resources so I reduced the disk_size from 12GB to 8GB.

This is where I start to diverge from the point of Photon. I remove Docker which saves roughly 250MB when the OVA is deployed. The disk space used in / is only 400MB so removing docker was a big drop proportionally. 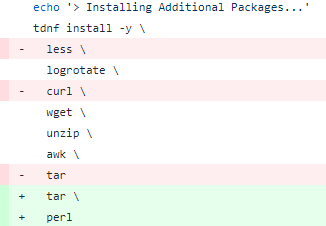 The packages for less and curl are already installed so I don’t try and installed them separately. For guest OS customization Perl is required so I install it here.

I use lab.local as the domain name in my homelab. Using .local might not be the best idea but it’s a lot of work for me to change it now. This change to DNS lookups allows proper resolution of my lab.local domain.

I think this is a typo, the Domain entry should be Domains. It controls the DNS suffix search list. The next 2 lines remove IPv6 but it takes an additional reboot after deploying the OVA to take effect.

Finally because this is a test system I enable ping by default.

These various tweaks results in 153MB OVA file, which I think is hard to beat. For comparison the Ubuntu 20.04 OVA is 493MB

To allow the packer build with vmware-iso I used a community VIB - https://github.com/umich-vci/packer-vib. It enables SSH and the GuestIPHack but it was the firewall change to allow VNC that was the big change.